Today Krill, Tammy, Lauren and Jessica headed to Sandy Neck Beach, Barnstable for a stranded ocean sunfish that had washed ashore that morning. Ranger Nina Coleman contacted Krill and arranged for transport to the carcass once the team made it down to the Gatehouse at Sandy Neck Beach.

Ranger Doug assisted the team by driving them to the location of the ocean sunfish carcass. As the team closely examined this carcass, they realized that this fish had been necropsied last week on the west side of Sandy Neck Beach.

Because the carcass was not marked, it was difficult to determine that it had already been looked at by NECWA last week. Hard to believe that this carcass had drifted over 5 miles from where it first washed ashore and it had flipped onto its left side. This is the side that was not exposed when the carcass was examined previously so the cuts made during the necropsy were not visible.

With some unexpected time on their hands, the team decided to walk some Sandwich beaches to look for stranded marine animals. We were wondering if there were any unreported ocean sunfish carcasses or cold-stunned sea turtles in the Scorton Creek area. 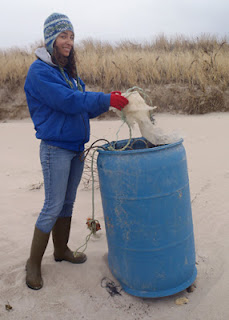 As the team walked along the high tide line, they picked up as much garbage or marine debris as they could. Luckily, some of the beaches had trash barrels right on the beach making disposal very easy.

As they walked, each lady picked up as much marine debris including fishing gear, plastic bags and balloons. They found a very decomposed leatherback sea turtle at Scorton Creek which Audubon has known about for some time. Nice job ladies and thank you for your amazing efforts today!