Stranding of an Atlantic white-sided dolphin in Manomet 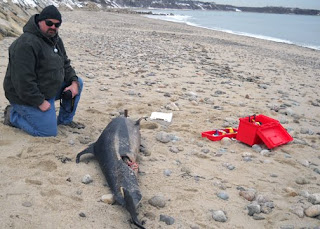 Today, NECWA staff members, Patrick and Krill headed down to the beaches of Manomet to check out a report of a dead, stranded Atlantic white-sided dolphin. Atlantic white-sided dolphins are common to our area in the spring, summer and fall, but tend to head further offshore and south in the wintertime. Dolphins are very social and travel in pods or family units. But often a single animal will wash ashore along our Cape and New England beaches. 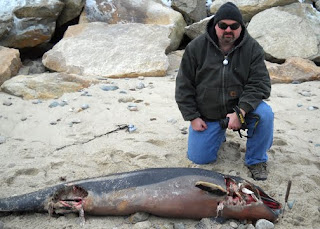 This carcass was reported by a local resident of the area, Donald, who had found the carcass the previous day. When Patrick and Krill arrived on site, it was clear that this animal had been dead for a long time. And the numerous cuts and scars on the animal's body were probably the result of the carcasses being moved up and down the rocky beach.
Body measurements, photographs and teeth were collected and this information was sent to researchers at the Marine Mammal Rescue Department associated with the New England Aquarium (NEAq) in Boston. The Marine Mammal Rescue Dept. oversees all marine mammal and sea turtle strandings (live or dead) in the area from Plymouth south all the way north to the Maine border.
It is unfortunate and sad when a beautiful dolphin like this individual strands along our shores. But it is hoped that the information provided today will help scientists better understand and protect this amazing species. And it may provide valuable information on cetacean strandings in general.
To report a stranded, live or dead, marine mammal or sea turtle to the NEAq, (Plymouth/Barnstable line to Maine) call their hotline number at 1-617-973-5247,
To report a stranded, live or dead, marine mammal or sea turtle to the IFAW Marine Mammal Rescue Program (Bourne and all of Cape Cod) call 1- 508-743-9548. 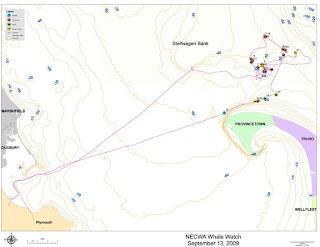 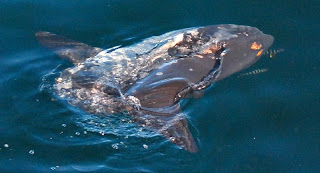 NECWA would like to thank Wayne Petersen for the following trip report and sightng list from our recent Seabird & Whale Tales excursion. Wayne once again is able to capture the essence of the trip making you feel like you are back on the boat once again!

Thanks also to our passengers (birders and whale folk alike) who helped to put together the sighting list.

This trip was a success due to the tremendous group effort of many people including our captain and crew, NECWA staff, interns, guest naturalists and so many others. Thanks to all for making this trip as memorable, fun and as exciting as our previous all day trips.

Also, thanks to marine biologist and CJB naturalist Fred Wasti for creating an online gallery of his images from this trip.  Click HERE to view Fred's amazing photo gallery.
And thanks to Patrick Farah for providing a GIS map that shows our path offshore. This map is at the top of this blog report.
Hope to see you this season for our June and September Seabird & Whale Tales excursions.
Best to all, Carol "Krill" Carson
Sighting Report provided by Wayne R. Petersen
They came from near and far....................
Ominous weather forecasts on the morning of this now-annual "Rite of Fall" ocean excursion delayed departure by two hours - a judicious move, since by early afternoon we enjoyed nearly glassy sea conditions and fine visibility.  An always-enthusiastic group of marine adventurers lined the decks and crowded the rails as the Tails of the Sea slowly rounded the tip of Plymouth Beach, where a dusky assembly of Double-crested Cormorants sat apart from a motley mix of Herring, Ring-billed, and Laughing gulls, the latter species largely comprised of recently fledged juveniles from the growing colony located behind the adjacent sand dunes of Plymouth Beach.

As our boat passed Saquish Head, on the port side and despite the foggy conditions, there was a collective gasp as an enormous swarm of many thousands of Tree Swallows swirled above the bayberries and cottages at the end of Saquish Beach.  This annual coastal gathering of pre-migratory Tree Swallows has to be one of the great birding spectacles of late summer in southern New England.

Even with low visibility and generally foggy conditions for the first hour or so, diligent observing by some of the birders onboard were able to pick out a scattering of seabirds as we cruised east across Cape Cod Bay - Wilson's Storm-Petrel, Northern Gannet, and Common Tern, to name but a few.  But spotting whales was really what was on the minds of many, so all eyes were on deck as we neared a dense array of tuna-fishing boats, a sure sign that we were approaching the edge of Stellwagen Bank. As trip veterans know, Stellwagen Bank is a justifiably famous and highly productive area for finding leviathans from the deep, often accompanied by significant gatherings of seabirds, foraging on food brought to the surface by the upwelling along Stellwagen's bountiful perimeter.

It didn't take long before sharp-eyed passengers began spotting the vaporous blows of spouting whales, almost simultaneous with the shouts by birders of, "Greater Shearwater...Sooty Shearwater, Wilson's Storm-Petrels...," and the games began!  For several hours we spent time with a number of different Humpback Whales, many of which were previously known to the marine mammal experts onboard.  And before long, some of the Humpbacks lolling beside the boat seemed like old friends, since both their names and some of their fascinating genealogies were shared with everyone onboard by our knowledgeable team of whale spotters.

Between deep dives by the otherwise friendly Humpbacks, the birders had a chance to watch a variety of seabirds as they circled the boat or sat in small groups on the water, practically becalmed by the nearly windless conditions.  As travelers began to see the different species to better advantage and learned how to recognize the species present, many were amazed to learn that many of the different species came from both near and far.  Several species were actually spending their winter here in the Northwest Atlantic during our summer, since they nest in the southern hemisphere during the austral summer, which is during our winter.  Included in this group were the Greater and Sooty shearwater and the tiny black-and-white Wilson's Storm-Petrel, the latter species breeding as far south as Antarctica, not arriving in our waters until late spring.  The "Frequent Flyer Miles" accrued by this abundant little seabird should be the envy of anyone who covets air travel!

Not all seabirds come from "Down Under," however.  The big Cory's Shearwaters that we saw in modest numbers nest on islands in the eastern Atlantic Ocean, such as the Azores, Canary Islands, and Madeira.  Similarly, the little Manx Shearwaters that were probably hailed from islands around Great Britain or from Iceland, however late-breaking news is that for the first time-ever this species was found nesting this summer on Matinicus Rock off the coast of Maine.  And then there were those spectacular plunge-divers, the Northern Gannets.  They no doubt nested on one of several large, island-bound colonies in the Gulf of Saint Lawrence, or else from Newfoundland.

By the time the sea conditions significantly improved, we were off the Cape's backside, several miles east of North Truro and Provincetown's Race Point.  Here we found some of our greatest concentrations of marine life.  There were a number of additional Humpbacks, several Minke Whales - the smallest of the baleen whales, scarcely reaching 30 feet when fully grown - and several large and curious-looking Ocean Sunfish (Mola mola).  These large and peculiar fish are actually quite common in our waters in late summer; however, being a more southern species than many of our local fish species, they often become cold- shocked with the advent of fall weather and end up beached on the shore, a plight unfortunately shared by various sea turtle species.  Besides the sunfish we also encountered a dense school of Spiny Dogfish (Squalus acanthias) clearly visible swimming at the surface.  This abundant species is actually a tiny shark relative and one that is regularly sold and eaten as "fish and chips" in England.  In our waters fisherman sometimes consider them a nuisance if they are fishing for more traditional American food fish such as Cod or Pollack.

Associated with the abundant schools of baitfish in the rips off Provincetown were several thousand feeding terns, both Common Terns and federally endangered Roseate Terns that traditionally gather off outer Cape Cod in late summer prior to migrating to the waters off Brazil for the winter.  Among these animated plunge divers were several Parasitic Jaegers aggressively chasing them in an effort to steal their hard-earned fish.  Infamous as kleptoparasites when they are at sea, Parasitic Jaegers actually nest in interior tundra regions around the top of the world prior to heading to sea during their non-breeding season.  They don't return to the Arctic until it is once again time to nest.  Among the other terns, we picked out several Black Terns, not looking black in late summer as they do in their dapper breeding plumage.  Unlike most other terns, this one doesn't nest along the coast; instead, it breeds in interior freshwater marshes of northern New England and the western prairie states.

Finally with time running out, the Tails of the Sea regrettably headed for Plymouth, at which point passengers had a chance to observe some of the plankton captured during a plankton tow, along with listening for their winning number as Krill Carson and her hard-working assistants handed out a plethora of raffle prizes to many of the passengers on board for the trip.  Once again, no one was disappointed by the discoveries made during the cruise, and all involved owe a debt of thanks to Krill and the crew and other staff for organizing these marvelous trips.  Don't forget, there will be another trip next June!