NECWA participated in the annual Plymouth Waterfront Festival for the second year in a row on Saturday August 28th. Dedicated staff members, interns and supporters helped make this event fun for all --participants and spectators alike. We would like to thank NECWA staff members Marianne, Pat, Val, Lauren and Art and volunteers Mary Nash. We would also like to send a big thank you to our NECWA interns Nick, Shaya and Michael as well as Lauren's husband Tony. What a great job by one and all.

Our booth between Plymouth Rock and the Mayflower II was crowded all day with visitors from both the local area and from as far away as France, China, Japan, and Russia. The kids had great fun designing and making their own fossil sharkstooth necklaces with the help of NECWA staff amd volunteers. Many of the children had studied sharks of different types in their school science classes and were eager to tell us what they knew about sharks while making their necklaces. And the designs that the children created were just fantastic. So beautiful and so creative.

Other children (and the adults they brought with them!) were fascinated by the display of educational materials on our tables, not just books and pamphlets on marine wildlife, but actual vertebrae from several types of whales, a skull with upper and lower jaws intact from an Atlantic white-sided dolphin, and a replica of a megladont (pre-historic shark) tooth. Volunteers were eager to share their knowledge of the "Lifestyles of Marine Mammals" with visitors to the table.

Displays of food consumed by baleen whales included sandlances, the small eel-shaped fish that humpback whales love as well as krill, those shimp-like organisms that form the base of the marine food chain. Also on display were preserved samples of copepods that are often gobbled up by North Atlantic right whales near the shorelines of Cape Cod.

Some visitors to our booth had recently been on whale watch expeditions with Captain John Whale Watching and Fishing Tours and were happy to share with us their delight at what they saw while offshore. Other festival participants were excited to try their first whale watch with Captain John Boats after speaking with us at the booth.

Throughout the day our volunteers also 'persuaded' visitors to take a chance in our raffle to win prizes kindly donated by local businesses that included:

· a night's stay at the Plymouth Hampton Inn & Suites for four,

· a restaurant voucher for four at The Jenny Grist Mill,

· tickets to the Pilgrim Hall Museum,

· "Plymouth at Its Best" a photojournal by Greg Derr

All proceeds go towards helping fund our educational outreach and research activities relating to marine mammals and other wildlife. At the end of a long day, the raffle winners were happy to pose for a picture as were the NECWA staff and volunteers who helped make this day a great success! 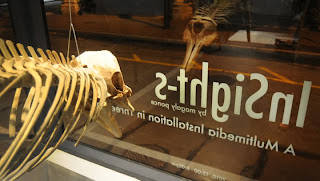 Art Exhibit by Magaly Ponce
If you find yourself downtown in the Providence Arts District please visit my exhibition, a culmination of two years observing whales off the coast of Plymouth, Massachusetts. The artwork will then travel to Cape Verde, Lisbon and the Azores.