The Shocking Ray of New England
Blog by Coleman Earner - December 21, 2020
Torpedo Rays are a genus of rays that are part of the Order Torpediniformes (electric rays). In reference to local sightings, the most commonly seen torpedo ray in the Cape Cod region is the Atlantic Torpedo (Torpedo nobiliana). They are cartilaginous fish (most similar to the structure of sharks and skates) with a flat and rounded disc-like structure. As suggested by their order, torpedo rays are most commonly known for their ability to discharge electricity of up to 220 volts from both pectoral fins (pectoral fins are flat and expanded and fused to the head area) as a self defense mechanism or as a means of capturing prey. Their feeding strategy consists of burying themselves under the sand and waiting for unsuspecting prey to wander by.

Torpedo Rays feed mainly on benthic/pelagic fish such as flounders, damselfish, and other small fish during the night. Depending on their size, a fully grown Atlantic Torpedo Ray may prey upon much larger fish such as small sharks, eels, and larger mullet fish. Atlantic Torpedo Rays are typically observed to grow 2-5 feet in length, but have been observed to grow as large is 70.9 inches. It is due to this large size and electrical discharge that larger predators rarely seek out Torpedo Rays for prey. In regards to their distribution, Atlantic Torpedo rays are found mainly on Atlantic coastlines ranging from Canada to Brazil as well as Scotland to Morocco in eastern regions.

The identification of Torpedo Rays are crucial to ensuring the consistent reporting of stranded Torpedo Rays along the Cape Cod region. Torpedo Rays are most easily identified by their large caudal fin as well as their well rounded pectoral fins. Compared to other rays, the tail on the Torpedo Ray follows a more typical caudal fin structure rather than a whip-like structure seen in many other rays. In addition to this, their eyes are set much further forward than other rays. Their coloration is most commonly brown on their dorsal surface with white on their bottom surface. As stated previously, a shock organ is present within each pectoral fin which can discharge dangerous amounts of electricity. Because of this, attempting to save a live stranded torpedo ray proves to be much more difficult compared to other marine life. Some suggest that it is safe to gently grab the live animal by the tail and pull it back into deeper water. Dead Torpedo Rays are perfectly safe to touch for the carcass will not shock you. If you find a stranded Torpedo Ray, please report your sighting to NECWA by completing our online Torpedo Ray JotForm. 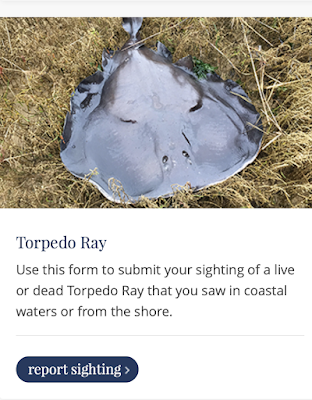 Our conservation efforts to protect organisms such as the Torpedo Ray are indicative of their true significance to their ecosystem. As we have seen through the strandings of Ocean Sunfish and Sea Turtles, the absence of these organisms means drastic change for the ocean food web. In relation to the Torpedo Ray, they serve as one of the many controllers of larger fish populations with their ability to take down larger prey. If they were absent from the local ocean ecosystem, larger fish populations would surely dominate ocean ecosystems when considering the constantly growing threat to shark populations as well. In addition, Torpedo Rays have proven to yield new discoveries with our limited information on them.

For example, in 2019,F. Neptalí Morales-Serna and others analyzed the discovery of a new species of copepod Echthrogaleus spinulus found on a Torpedo Ray. In order to further understand the significance of Torpedo Rays, our conservation and research efforts must be prioritized further. 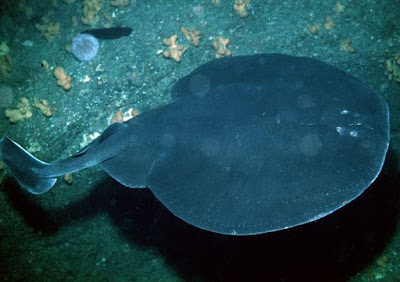 Among the well documented strandings of Mola mola, various species of Sea Turtles, and other marine life, Torpedo Rays remain one of the lesser known and less understood marine organisms that are reported to strand. However, a pattern noticed by NECWA is that Torpedo Rays typically strand each fall and early winter along with other marine animals like ocean sunfish and sea turtles. In addition to this, a majority of stranded Torpedo Rays documented bt NECWA appear to be female. Apart from this trend, there is very little information on the specific causes of Torpedo Ray strandings. While the conservation status of the Atlantic Torpedo Rays has not been evaluated, there is still growing concern as an increasing number of Torpedo Rays are stranding each season. Further research must be done in order to hypothesize the root cause of Torpedo Ray strandings.

Our lack of knowledge on the biology and ecology of the Torpedo Rays and their cause of stranding increases the importance of collecting new stranding data. In order to ensure that Torpedo Rays and any other marine life are protected, it is crucial that any sightings are properly and quickly reported. NECWA proudly strives for the further research of Torpedo Rays and how we can assist with stranding relief efforts.

For more information on Torpedo Rays, refer to the studies and links below:

Biology and Ecology of rays in the Chesapeake Bay, Joseph W. Smith