Beach Cleanup on Saturday, Sept. 22 from 10 am to 2 pm at Scusset Beach

Today staff from the Captain John Boats, the Department of Conservation and Recreation and the New England Coastal Wildlife Alliance teamed up for their annual beach cleanup at Scusset Beach. Captain John naturalists, Krill, Tammy. Marianne and Tiffany helped set-up the cleanup effort while New England Coastal Wildlife Alliance staff members Dominica and Bob helped run the event. Tiffany's mom, Cathy, came to help set-up and participate in this event and she had us all laughing as we put up our tables and organized the supplies.

This cleanup effort is part of COASTSWEEP, the statewide coastal cleanup sponsored by the Massachusetts Office of Coastal Zone Management (CZM) and coordinated by the Urban Harbors Institute (UHI) of the University of Massachusetts Boston. COASTSWEEP will celebrate its 25thanniversary in 2012.

The morning was a bit gray with some drizzle, but that did not dampen our spirits as we greeted public volunteers who came to join us for the cleanup effort. We had 18 guests help out during this event which made it one of the best well attended cleanup efforts to date! And this team picked up over 80 pounds of garbage and plastics off the shoreline of Scusset Beach.
John DeCosta, the Supervisor at Scusset Beach State Reservation, helped out with this event and drove the Kubota utility vehicle to pick up garbage from participants who were working hard on the beach. 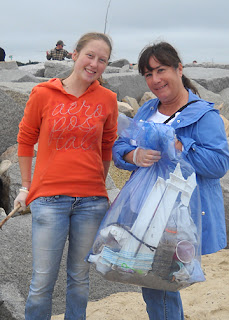 After the cleanup effort, everyone met back at the pavilion for refreshments and a free nature raffle. Everyone walked away with a prize as a way of thanking folks for their help this morning. Thanks to Captain John Boats for providing two guest tickets for the whale watch and to NECWA for the t-shirts, videos, books and stuffed toys.

Once again, we thank our sponsors and our volunteers who helped with this event. We hope to see everyone back next September as well as new additions to our motley crew! 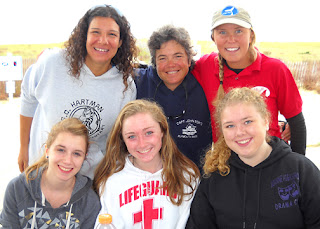 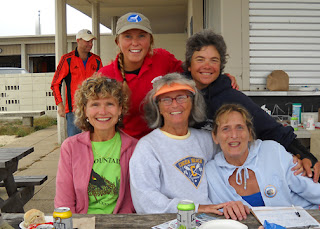 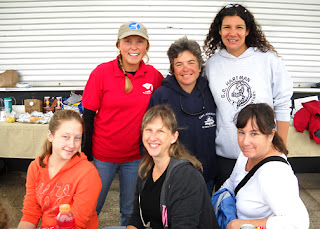 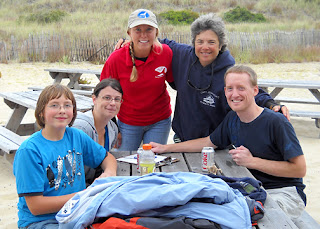 September 18, 2012 Necropsy of an Ocean Sunfish

On September 17, 2012 the National Marine Life Center (NMLC) in Bourne called us about a live ocean sunfish in Little Buttermilk Bay which is part of  Buzzards Bay. NMLC staff member Kate headed over to that are to check on this fish and she contacted us about this presence of this fish in this area.

Kate was able to locate this ocean sunfish and it appeared to be in good shape as it was swimming in Little Buttermilk Bay.  However, later that afternoon and as the tide was going out, the fish stranded and died. Kate returned and headed out on the mud flats to examine the ocean sunfish more closely. Kate then made another call to NECWA to update us on the status of this animal.


NECWA staff members were able to respond to this stranding the next day. Krill, Belinda, Michael and Tiffany all met Kate back at Little Buttermilk Bay late on Tuesday afternoon. Belinda's children, Foster and Merrick, also assisted with this necropsy and boy were we glad to have the extra pair of hands.

﻿The first thing we had to do was to move the carcass off the mud flats. That took 4 of us as we placed the carcass under a matt and dragged it to the marsh grass area where it would be easier to weigh and necropsy the carcass.

Michael set-up our portable weighing tripod while Tiffany placed the straps under the carcass.Foster took over from there and used the chain lift to lift the carcass off the grouns. This carcass weighed in at 276 pounds which is light for most of the ocean sunfish that we have examined over the years. 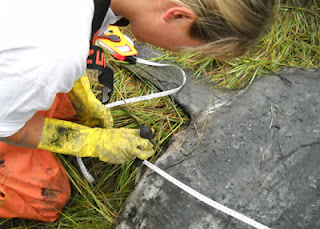 Merrick did a great job at recording the information being collected and writing it all down on the data sheet.
But that mud was getting everywhere, even on the data recorder!


This team worked hard all the way up to sunset. Then it was time to put away the gear and collect all our samples and supplies. Much thanks to everyone who helped out

NECWA intern Ashley Bae participated in an Arctic expedition. Here is Ashley's account of the experience.

"Students on ice is an award-winning organization offering unique educational expeditions to the Antarctic and the Arctic. Our mandate is to provide students, educators and scientists from around the world with inspiring educational opportunities at the ends of the Earth and, in doing so, help them foster a new understanding and respect for the planet." 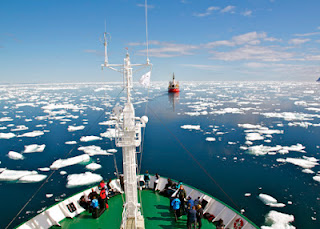 "The ship- and land-based journey will explore the eastern Canadian Arctic and western Greenland. Every day on land and aboard our ice-strengthened expedition vessel will be different. Our approach to expedition learning weaves together exciting shore landings, interpretive hikes, community visits, Zodiac cruises, and exploration.

As always, weather, ice or other conditions may necessitate changes to the itinerary. Flexibility is the key!"


Also, here is the direct link for the Arctic 2012 expedition I participated in, in case you are interested. There are more photos from a professional photographer that followed us on the trip and day to day itineraries posted! http://studentsonice.com/arctic2012/

I had the most wonderful experience up North. We went hiking almost every day and saw spectacular wildlife from polar bears to bowheads to seals to murres to many species of lichens. Although I initially joined the expedition for the science, I was amazed by the resilient Inuit people and their culture as well. In fact, 30 of the 75 students onboard the expedition were Inuit and one girl came from Grisefjord, the Northernmost community in the world.

I loved meeting the Inuit students and embracing their culture-- we got a chance to listen to many of their stories, to play their traditional games, and to meet the elders of some of their communities. I am very grateful for the opportunity I had to visit the Arctic (Baffin Island & Greenland); to see the glaciers calving and retreating right before my eyes was a dream come true, and I now see more than ever why protecting the poles means protecting the planet.