Thank you to all our participants who joined NECWA for our Ocean Exploration Cruise. We sailed aboard the Privateer IV, owned and operated by 7 Seas Whale Watch, for a Saturday full of wildlife viewing, big swells, science and chocolate! Thank you to our guest naturalists that included Wayne Petersen, Jim Sweeney, Ingrid Biedron, Adrian Jordan, and Thomas Robben. Thanks to NECWA staff and interns that included: Krill Carson, Tammy Silva, Courtney Callahan, Michael O'Neill, and Barbara Cross. A big thank you to 7 Seas Whale Watch, Captain Jay Frontierro and crew for doing such an amazing job offshore!

Our weather offshore was a bit overcast with fog in the morning and periods of light to moderate rain in the afternoon. Winds were out of the north, northwest at 3-9 mph early, then west, northwest at 6-13 mph. For the birders onboard, highlights were two Sabine's gulls (adult and juvenile), five Northern fulmars, and five pomarine jaegers.

October 22nd was a mystical day beginning with limited visibility and rough seas. With Captain Jay Frontierro at the helm, veils of fog hugging the horizon where no match for his uncanny ability to uncover 10-12 humpback whales near the southwest corner of Stellwagon Bank.

Many of these humpback whales in this area, Hancock, Crisscross, Rocker, Bandit, and our beloved Salt with her 14th calf Sriracha, were intent on their feeding and gave us quite a show. The Humpbacks treated us with bubble net feeding, breaches and displayed their unique flukes under ever improving light conditions. However, there was more than one star of the show.

Not long after our departure from Gloucester we encountered 4-5 Harbor Porpoises and soon a Minke and Finback whale with the brief presence of an Ocean Sunfish! Throughout the day scientists, volunteers and interns from NECWA, Mass Audubon, and the Stellwagon Bank National Marine Sanctuary kept the ship entertained with commentary on animal behaviors, witty jokes, a free nature-themed raffle, and pre-Halloween treats.
A live plankton tow gave guests a close up view of salps that look like a translucent barrel-shaped pod or string.

Despite an unsuccessful chumming attempt to attract our favorite sea faring birds, we did see large numbers of shearwaters, including great shearwaters, Cory's shearwater, sooty shearwaters, manx shearwaters, as all as Northern gannets and jaegers who kept pace with our vessel and often with the feeding whales.
To top it all off, our day of adventure ended with a rainbow and a safe harbor. Thanks to Michael Thompson for the GIS map below of our travels offshore and the locations of the marine mammals that we observed. 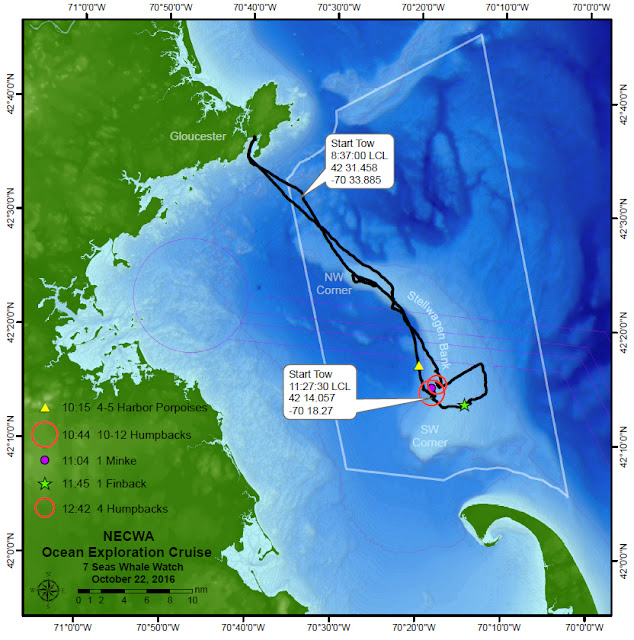 Thank you to Krill Carson for organizing this trip and to our captain, participants, and scientists!

Photo Album and Slideshow of our Ocean Exploration Cruise

Also to go Thomas Robben's blog that reviews the trip by clicking HERE: