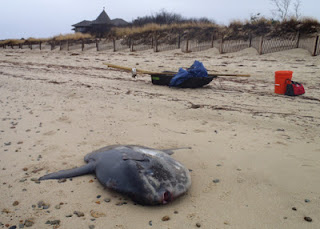 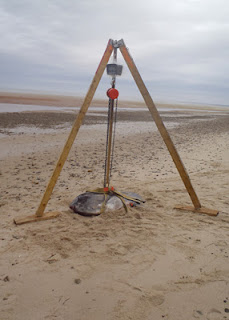 Yesterday, Mary contacted Krill about a dead ocean sunfish off Linnell Landing, Brewster. Krill headed down to Brewster early the next morning and relocated the carcass close to the beach access at Linnell Landing.

Krill contacted friends and colleagues David and Fran Clapp who live in Brewster and who graciously changed their morning plans to come and help with the necropsy. This turned out to be a 225 lb. ocean sunfish and the first dead ocean sunfish we have recorded for Linnell Landing this season. 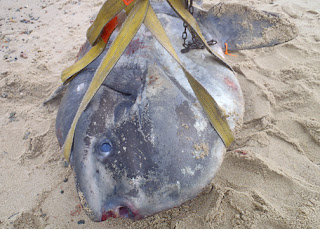 This piece of equipment has been critical to the work we do in the field. Given the immense size and weight of these animals, we can not move a carcass in order to determine its weight. The portable tripod allows us to collect an accurate weight for each carcass by bringing the scale to where the carcass washed ashore. How cool is that!

When conducting our external examinations, we collect photographs as well as a series of body measurements. We also record any scars or marks visible on the body, including any signs of human interaction and scavenger damage. However, to determine the sex of the ocean sunfish, we have to cut into the body cavity and examine the gonad. As we started our internal examination, we determined that this ocean sunfish carcass was a young male.

During all internal examinations, we collect a number of tissues and organs for later analysis, including vertebrae, liver, skin, muscle and otoliths. Most bony fish can be aged using the otoliths or "ear bones" located in the head of the fish. Otoliths are calcified structures located inside the skull. But the otoliths of the ocean sunfish are very small and not as developed as other bony fish. It is unclear if the otoliths of this species can be used to determine an animal's age. So we collect and keep our fingers crossed that a technique for aging sunfish using their otoliths will be developed in the future.