As we drove south on Route 3, my cell phone started ringing off the hook as additional ocean sunfish carcasses were being reported in Brewster and Eastham. By the end of the day, we were able to determine that a total of 6 dead ocean sunfish had stranded dead on the beaches of Cape Cod. When all was said and done, we were able to locate and examine 5 carcasses and all were females!

In an effort to get some additional help with what was turning out to be a very busy day, I made a frantic call to Michael Sprague at Mass Audubon. Michael put the word out to their volunteers and found 3 people who were available and interested in helping out. Those volunteers were Kelly, Mary and Bruce. I could not have examined 5 of the 6 carcasses that were reported that day without their help. I can not thank them enough for their time and efforts over the course of the day as we moved from one carcass to the next. Never a complaint and always a "can do" attitude. People like this are gems and their efforts are greatly appreciated. Thank you Mass Audubon for sharing your volunteers and sending us such amazing help!

Our first stop was the carcass that had been reported on Breakwater Beach in Brewster. This turned out to large female ocean sunfish that weighed approximately 725 pounds. This carcass was very fresh for its exposed eye was still present. This animal had been hit by a boat sometime in the past for there were extensive propellor cuts through it dorsal fin and some of the scalloping on its tail fin (clavus) were missing. All wounds were nicely healed. Sad to think that this individual survived a collision of this magnitude, only to become trapped by Cape Cod and die from cold-stunning.

The next fish was a very small, but condensed female that stranded between Thumpertown Beach and Campground Beach in Eastham. I have never seen an ocean sunfish with such an extensive head crest and such a puffy tissue band near its clavus. This fish weighed close to 330 lbs. and was so compact that we couldn't collect some of our body measurements for the body parts were too close together. 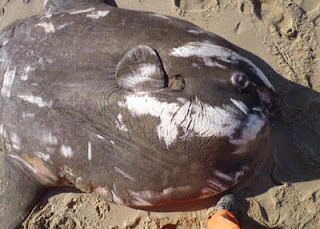 Less than a few hundred feet from this small carcass was a second carcass, but this carcass was immense in size!  Due to the large size of this animal, we didn't even attempt to weigh it using our portable weighing tripod. But we did determine that we had yet another female on our hands and we were able to collect all the necessary information before continuing on to the last two carcasses for the day.

The last two carcasses were located close to Cook's Brook Beach in Eastham. Both carcasses were more decomposed than any seen that day so they must have been floating around for some time before they stranded. The first carcass had stranded right in front of the parking lot was small in size. This individual turned out to be a female.

The second carcass was a bit south of the parking lot and was much larger in size. But the tide was coming up so we could only collect a few measurements and tissue samples from this animal. In the coming days, we hope to return to this last fish to collect the otoliths and vertebra, but we were able to determine that it was also a female ocean sunfish.


As Jamie and I headed home, we received a call from a good friend, Lisa, from Brewster reporting a 6th stranded dead ocean sunfish. I will include one of Lisa's photos below. Hard to believe that Lisa's fish makes carcass #39 for us this season. This is the highest number of dead ocean sunfish that we have had in any season and we fear that the season is not over yet. We will be heading back down to Cape Cod to try and locate Lisa's fish and hope that no additional carcasses are sighted. 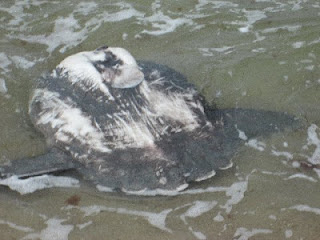 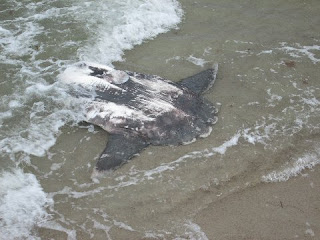 A busy day to be sure, but a productive day that will help us better understand this strange and unusual fish as well as protect those living animals. Thanks again to everyone who helped today, not just the people who assisted on site, but all the people who took the time to call Krill with sighting information. We couldn't do this work without your help.