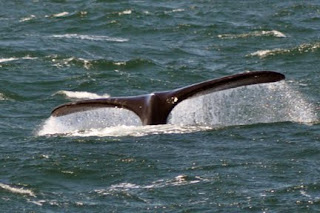 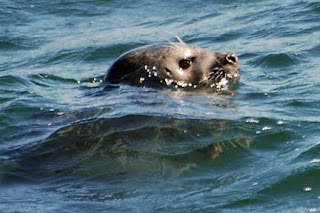 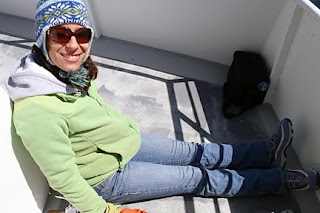 NECWA would like to take a moment to thank Captain John Whale Watching and Fishing Tours for their continued support of our internship program for high school and college students in the New England area. Their support allows our interns access to the unique marine wildlife off New England. We hope you can support this company by joining them for a whale watch or fishing trip this season. Check out their website to learn more about trips, times and schedules. Go to www.captjohn.com to learn more. 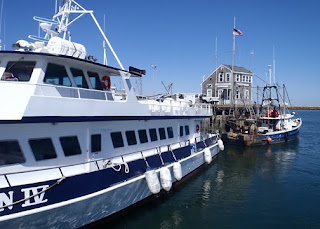 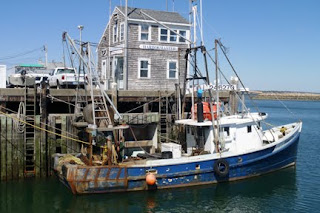 We were treated to bright sunny skies and beautiful view of Plymouth Harbor as we prepared to leave the dock. Excitement was in the air as this was our first trip offshore after being land-locked all winter. 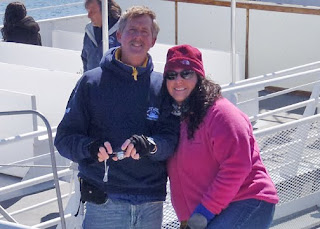 What was really great was the chance to reconnect with good friends and colleagues, including crew members Ron and Steve, Captain Johnny and naturalist extraordinaire Joanne. 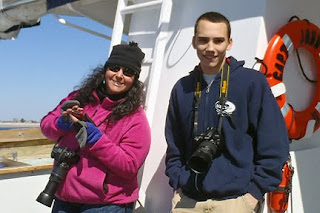 As we passed the State Pier, we got a close-up and personal view of the Mayflower II which recently returned from Fairhaven where she has been docked for much of the winter. 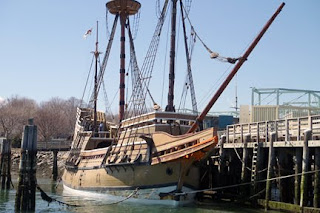 And as we moved along Plymouth Beach, we had great views of geese and seaducks including, Brant Geese, Common Eiders and Longtailed Ducks. 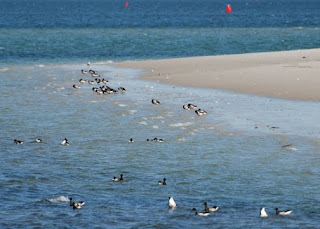 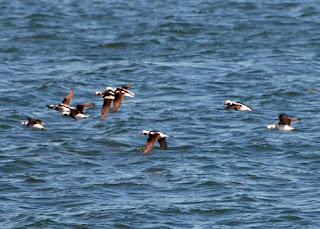 As we traveled past the Duxbury Pier Lighthouse, also called Bug Light by local fishermen, we observed quite a few harbor seals resting on the rocks. This is not an uncommon sight in the spring, especially during low tide. Harbor seals are quite abundant in our waters during the winter and early spring. Soon, they will migrate north to pup and continue to feed. But for now, they are very content to enjoy our cold, yet productive waters. 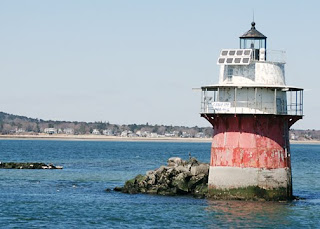 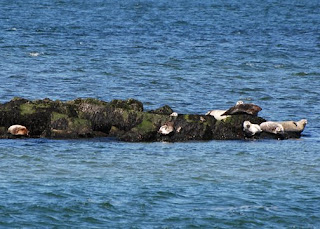 Continuing on our way offshore, we passed Gurnet Point and moved into Cape Cod Bay. Our destination were the waters off Race Point, the tip of Cape Cod. We were hoping to find humpback whales and finback whales that might be feeding just off Race Point or in Cape Cod Bay. At this time of the year, these are often places where whales congregate as they feed close to shore. 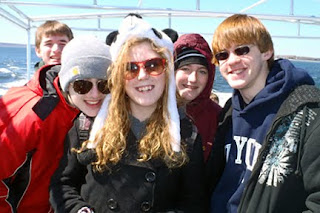 This is also the time of year when North Atlantic Right Whales come close to shore to feed on large blooms of plankton. Because this species if the most endangered of all the large baleen whales, federal regulations stipulate that all vessels remain 500 yards away. If a right whale surfaces closer to your vessel than 500 yards, you are required to slowly move out of the area. 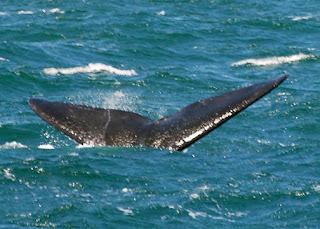 To see a right whale is truly a sighting of a lifetime since there are fewer than 450 animals remaining in the western North Atlantic. Using binoculars and cameras with large zoom lenses, one can get a decent look at this amazing species that is so critically endangered. But the best right whale watching is from shore given the federal restrictions. If you have a chance to drive down to Provincetown in the spring, take time to walk the beaches of Herring Cover and Race Point and keep an sharp eye out for whales close to shore, including right whales. 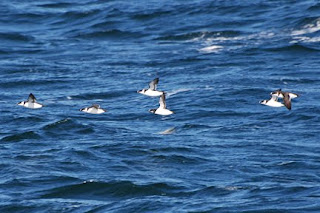 While offshore, we even got a chance to see a flock of razorbills flying in tight formation just off the starboard side of the boat. These cold-water birds are common to our area only in the winter and spring. In a few weeks, most will head further north to breed and feed off Maine and Canada. 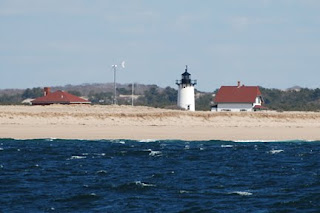 As we continued our journey past Race Point, we picked up a harbor seal that was resting at the surface with its nose up in the air. What a great look at a beautiful marine animal that also feeds in our waters this time of the year. 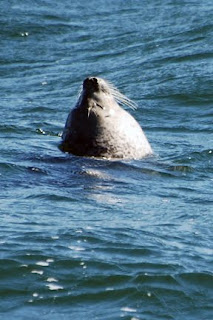 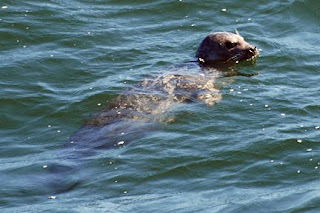 As we sat and watched the seal, we noticed a few fins cutting through the water. These turned out to be dolphins, probably Atlantic white-sided dolphins, the most common dolphin in our area. We also saw smaller, more triangular dorsal fins telling us that the little harbor porpoise was also in the area. The rough seas made it difficult to see the bodies of these small animals, but we did see the dorsal fins cutting through the water. 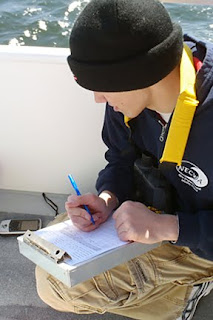 Nick and Tammy helped Krill collect sighting data and photographs on all the marine wildlife that was seen over the course of the trip. In all, we spotted over 30 right whales that were feeding all along the shores of Cape Cod from inside Cape Cod Bay to the backside of the Cape as far as Highland Light in Truro. 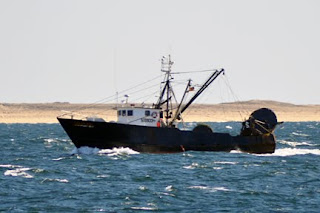 Also in that area were quite a few commercial fishing vessels and a few of these vessels were moving right through the area where right whales were feeding. Captain John Whale Watching and Fishing Tours is very concerned about the safety and future of the right whale population. That is why we strictly adhere to the federal guidelines and regulations for whale watching.
One stipulation is that all mariners are required to report all right whale sightings to the National Marine Fishiers Service (NMFS). So later that day, Krill made the call to the NMFS hotline and provided all of our sightings information to the Right Whale Sighting Advisory System that is run by NMFS. Check out their website at www.nefsc.noaa.gov/psb/surveys.
Unfortunately, we were never able to find humpback whales or finback whales, but we had distant sightings of right whales and great sightings of seals, seabirds, dolphins and porpoises. A few days after this trip, friends of Captain John who live on Cape Cod called to say that humpbacks and finbacks have recently been seen off Race Point. We can't wait to get offshore again for another great adventure with some of the most endangered and special marine wildlife on the planet. 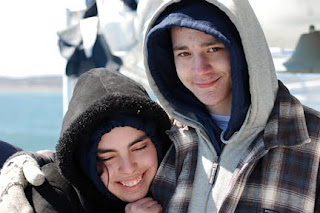 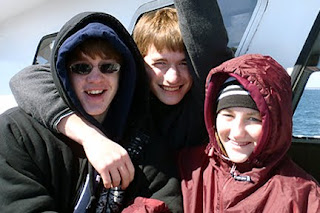 The next whale watches scheduled with Captain John Whale Watching and Fishing Tours out of Plymouth Harbor are on Saturday, April 9 and Sunday April 10. To register online or to learn more, go to their website at www.captjohn.com. 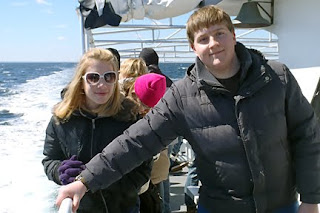