On our whale watch yesterday aboard the Tails of the Sea, Captain John Boats, we found the same pair of finback whales that were feeding in this area on yesterday's trip. And this pair was continuing to feed in their very own style! 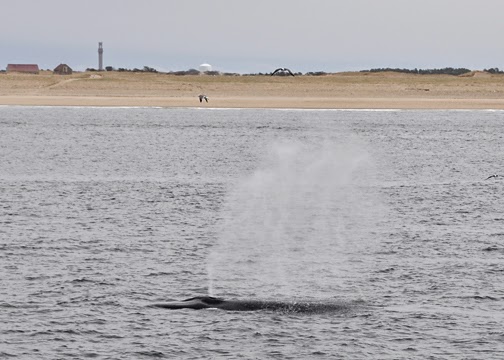 Both whales were coordinating their movements and they surfaced along the steep drop-off that is just off the shores of Race Point. And like yesterday, these animals were using bubble clouds to help them concentrate the bait before lunging mouth open beneath the waves.

Finback whale don't often use bubbles when feeding, so this was a very pleasant surprise. These large and fast whale typically use their speed and agility to corral the bait into a tight ball before lunging.


Always great to see a twist to whale behaviors and to see whale do behaviors that they are not known for. So we don't know everything and that is a good thing. Makes life more interesting.

If you are in the Provincetown area, now is a good time to walk the beaches of Race Point and Herring Cover to see whales, BIG whales!

Aboard the Capt. John & Son II today, we had some amazing views of endangered finback whales and seals that were feeding right off the beach. They were so close to the shoreline that anyone walking the beach area would have gotten a sighting of a lifetime!

There is a steep drop-off less than 100 yards off Race Point Beach. So there animals were in at least 100 feet of water. These steep drop-offs tend to concentrate small bait fish, the primary food for the big whales. So you often see large whales feeding off Race Point over much of the spring, summer and fall.

We had at least 4 finback whales and quite a few harbor seals and gray seals all feeding in this area.

Quite a show! So get out and walk those beaches if you have a chance. Or join us aboard the Capt. John Boats out of Plymouth for our next available whale watch. 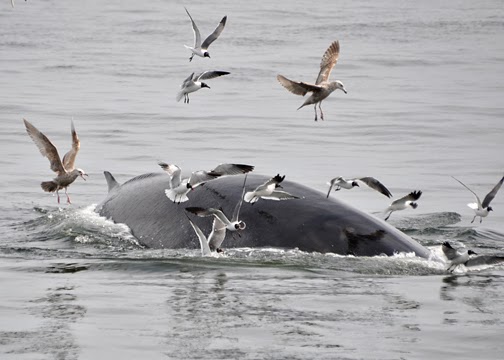 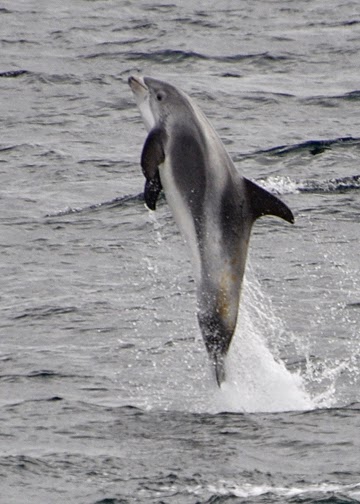 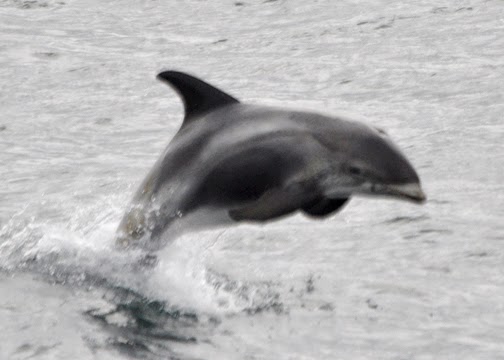 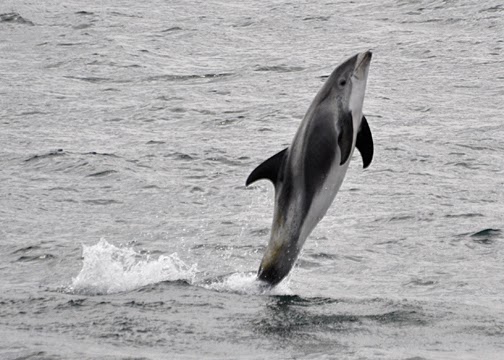 NECWA staff members Krill and Leah were working onboard Capt. John's 12 noon whale watch today. As they headed offshore, they saw big splashes off the bow. To their surprise, they found a very exuberant white-beaked dolphin who was breaching or jumping out of the water. 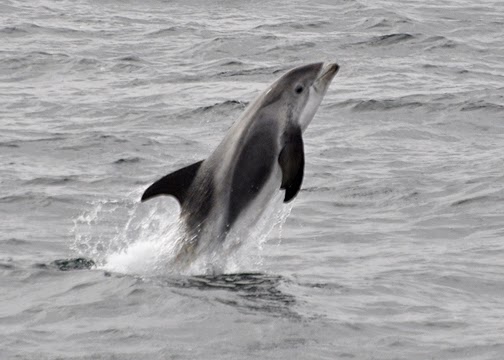 Unusual to see a single dolphin on its own for these animals are typically very social and travel in family groupings called pods. And why this dolphin was repeatedly breaching out of the water is still a mystery to us. 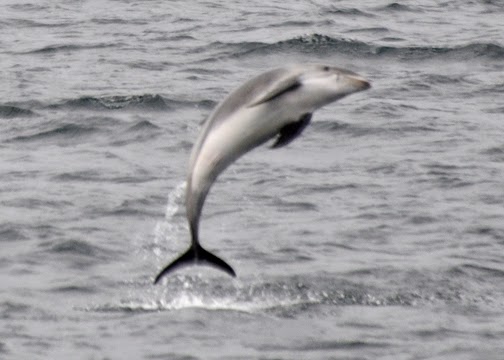 Krill counted this dolphin jumping at least 25 times in a row! What an acrobat and what a show off! 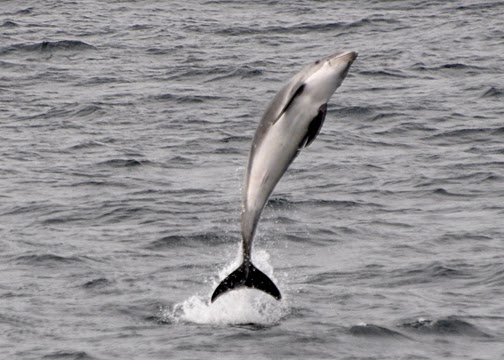 Can't wait to get offshore next weekend to see what Mother Nature has "in store" for us.

First Whale Watch of the Season with Capt. John Boats

NECWA staff members Tammy and Krill had a great first trip offshore with Capt. John Boats out of Plymouth. 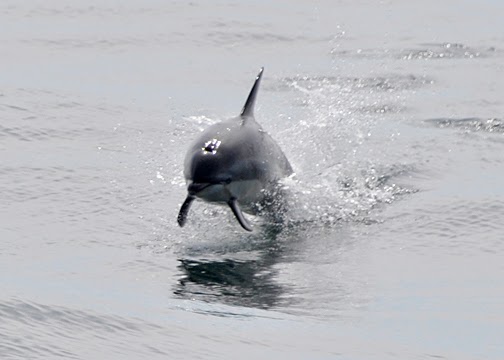 As we headed out of Plymouth Harbor, we spotted a North Atlantic right whale skim feeding a few miles offshore. As we slowly moved away from this animal and continued northeast, we spotted an additional 2 right whales all feeding separately. Right whales are the most endangered species of baleen whales in our waters so these were sightings of a lifetime for all onboard.

Our next sighting was a large group of Atlantic white-sided dolphins. These animals were feeding in small groups, but some came right over to our boat to ride the bow wave and the stern wake as we slowly moved through the area.

As we continued offshore we saw at least 4 to 5 minke whales and a small handful of harbor porpoise. We also had distant looks at 1 harbor seal and 1 gray seal. But the best sighting of the day was a humpback mother and calf that were slowly moving east.

As we slowly approached this pair, we were delighted to see that this was Tongs, a female humpback whale who has been seen in our area since 1989. This is the 5th calf that Tongs has brought back to our northern feeding waters.

Tongs and her calf didn't seem bothered by our presence and continued to slowly move to the east. It was such a joy to see this young calf who is less than 6 months old. This baby whale was born this previous winter in the warm waters of the Caribbean. The calf will stick tight to Tongs for a year before heading off on its own. 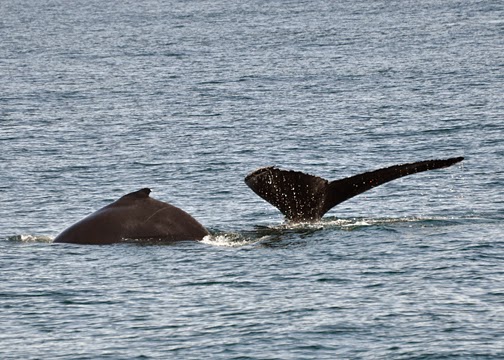 As we headed home, we realized what a special trip we had. Endangered right whales and humpback whales that included a mother with her new calf of this year. 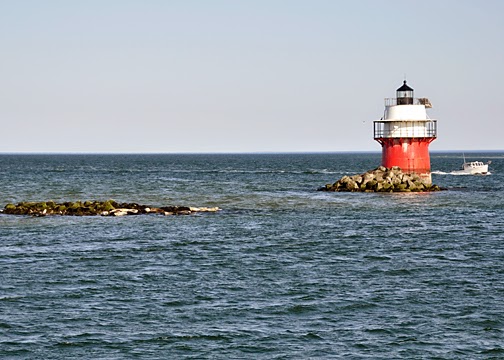 As we retuned into Plymouth Harbor, we noticed harbor seals resting on the rocks close to the Duxbury Pier Lighthouse. Our captain was very kind to spend a few minutes watching these sleepy critters. 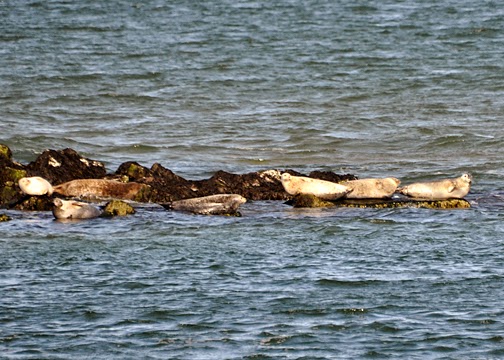 A successful first trip of our 2014 season. Hope you can join Capt. John Boats sometime this season.