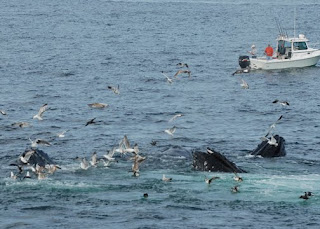 Leave from the Town Wharf in Plymouth at 10 am and head to the waters off Cape Cod to view a variety of coastal marine wildlife.
Enjoy the ride as we head offshore aboard the Tails of the Sea, a luxury whale watching vessel owned and operated by Captain John Boats (www.captjohn.com).

To learn more about this trip or to register and pay for this event, go to our Constant Contact's Events link at http://events.constantcont​act.com/register/event?llr​=qdcmohcab&oeidk=a07e48zcl​crf2e2a89b 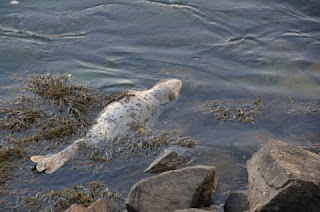 Text contributed by NECWA staff member Ann Cook. Photos by Robyn Perry.
On July 2, 2011, the United States Army Corp of Engineers (USACE) stationed at the Cape Cod Canal received a call about a stranded seal that appeared to be a juvenile gray seal. This seal had been reported to the International Fund for Animal Welfare (IFAW) the day before and IFAW staff had come down to the Canal to assess the animal's condition. At that time, IFAAW determined that the seal was healthy and in good condition.
However, on this first Saturday in July, a large wake from a boat had thrown the seal against the rip rap and stunned her. Ann Cook contacted Krill from NECWA asking for advice. Krill recommended a second call to IFAW updating them on the change in the seal's status. 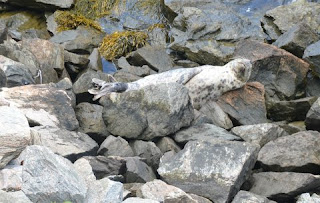 IFAW recommended that the seal be rescued due to this change in the health of the animal. The first Rangers on scene were Gabe Lundgren, Ann Cook, Roger Hagen, and USACE Park Attendants, Robyn and Lin Perry. This team successfully crated the young seal and transported it to the IFAW rehabilitation facility.
IFAW staff called back to indicate that this was a female gray seal that was pupped earlier this season. So they estimated her age to be around 6 months. She was doing well in rehab and they congratulated the team for their quick and successful actions saying that this was the best thing that could happen for the seal under the circumstances. 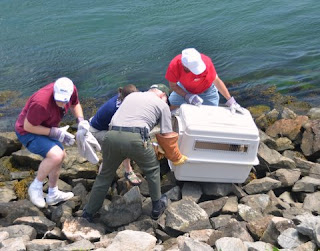 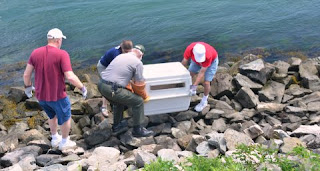 Congratulations to all that helped with this rescue. Team effort, good attention and quick action are key to a successful rescue for any marine mammal. Great work team! 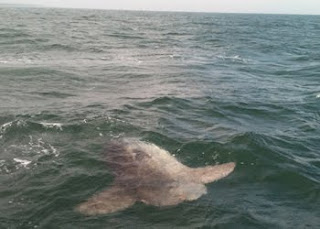 On the afternoon of July 4th, a local fisherman spotted an ocean sunfish, Mola mola, 150 feet off the entrance to the Waquoit Bay jetty. From all observations, the fish was in good health and was swimming slowly at the surface. This "easy going" behavior allowed the fisherman to get some fabulous photographs of this strange and wonderful fish. 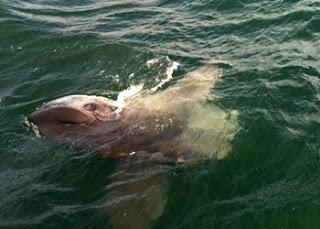 This sighting is the first one that has been reported to NECWA this season! NECWA has a community-sighting network for ocean sunfish and basking sharks called NEBShark (New England Basking Shark Project) and we ask all interested members of the community to report sightings of live or dead animals offshore or on the beach.
Information from NEBShark will be used to better understand the biology and life history of the ocean sunfish and the basking shark, two large, coastal pelagic fish that feed off New England each spring, summer and fall. And the data collected from the sighting network combined with information collected during strandings will be shared with other researchers in the US and abroad to advance our knowledge even further.
Last season, NECWA staff and interns responded to two live strandings of ocean sunfish and 18 incidents of dead stranded animals. No one knows why ocean sunfish strand along our Cape Cod beaches each season, but we hope our efforts will help to answer this question.