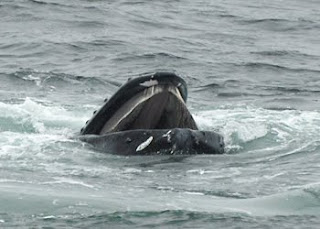 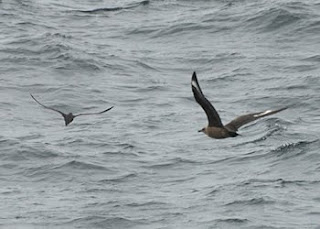 Trip Summary Report from our Spring Seabird & Whale Tales Excursion.
June 12, 2011 from 8 am to 4 pm

Watch our slide show above of images taken from our June 2011 SAWT trip. Enjoy!

Thank you from all of us at NECWA. We had a great time and we hope you did as well. Hope to see you in September for our fall SAWT trip! 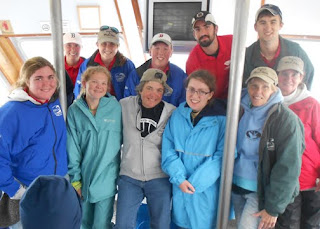 An amazing look at two mother and calf pairs that collide with one another as both moms are feeding at the surface. On the 2 pm whale watching trip aboard the Tails of the Sea, a luxury commercial whale watching boat owned and operated by Captain John Boats, we watch in amazement as two humpback mother and calf pairs cross paths right off our bow!

Ganesh and her calf are coming towards our boat as they surface feed off the bow. This pair runs smack dab into Venom and her calf who are also feeding at the surface, but off our port side.

What a commotion as moms and kids run into one another! But true to form, these humpback mom's keep their cool and keep on truckin! Venom and calf move continue to feed our bow as they head to the north and Ganesh and calf continue to feed as they move off our port side heading to the southeast. 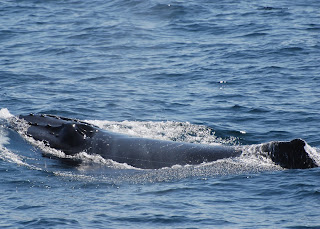 Whale Watch Trip on Saturday, July 30th aboard the Tails of the Sea, a commercial whale watching boat owned and operated by Captain John Whale Watching and Fishing Tours.
Entanglement of Rapier's 2009 calf with thin, monofilament line.
Posted by Krill Carson
We had a beautiful day offshore with clear skies and relatively calm seas. As we crossed over the southern part of Stellwagen Bank, we found a cluster of humpback whales scattered throughout the area.
Our first close sighting was a small whale that was a bit active. This whale was rolling on its left side and flicking its tail out of the water. We didn't think much about this active behavior since a number of other whales were breaching sporadically in the area. But when I looked back over my photos, I realized that this whale had monofilament draped over its back. 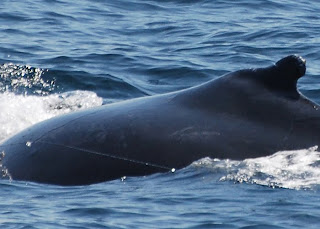 Monofilament is used by rod and reel fishermen offshore as they try to catch striped bass, cod, haddock and other medium-sized fish. It is also used by fisherman who are trying to catch giant bluefin tuna. The issue with monofilament is that it is clear and very difficult to see. This observation is a case in point. I didn't realize that the whale had snagged monofilament line until a few days later when I sat down at my computer and went over each sighting with a fine tooth comb. 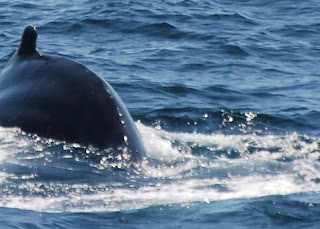 We were able to identify this small humpback as Rapier's 2009 calf. This young whale does not have a name yet, but it has been seen quite a lot offshore this season. This young animal is easy to identify even from a distance for it was hit by a boat's propellors on its tail stock when a young calf. Luckily the wounds healed, but the tell tale sign of this encounter is quite evident. 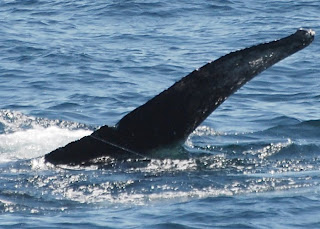 I emailed the Provincetown Center for Coastal Studies disentanglement team to let them know what I had discovered and sent them a number of photographs that clearly show the monofilament line. It appears that the line is snagged on the left side of the whale's head and low down. And the line does extend beyond the fluke of the whale, though it is not clear how far.
The PCCS team is offshore this morning and will be looking for Rapier's 2009 calf. There are a number of other animals that have also been seen with monofilament on their bodies including Canopy's calf of this year and Reflection. Right now, both are reported to have shed the monofilament which is great. But these types of entanglements remind us of the dangers that our whales face when they come to feed off Stellwagen Bank. 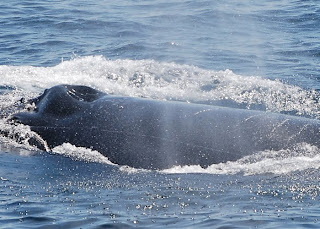 Unlike ropes or thick line, monofilament is very thin and often clear, making it difficult if not impossible to see. If this material were to wrap around the flipper or tail stock of the animal, it is not clear how the animal would shed it and it is not clear what negative impacts the line would have on the animal's health and well being.
Issues pertaining to whales and fishing ropes and lines are currently being addressed by fisherman and managers. But issues related to whales getting caught or snagged on monofilament line from small recreational or commercial vessels fishing in the areas were whales are traveling or feeding is not being addressed on the same level. We need to investigate this issue more and we need to act now or many other whales, both large and small, will undergo the same fate as Rapier's 2009 calf.
We assume that Rapier's 2009 calf will shed this gear like the other whales have done so far this season. But the fact that a number of humpback whales are getting snagged by monofilament line is alarming and we need to investigate this issue.
Thanks to Captain John Boats for all their assistance in this sighting and to the researchers and the disentanglement team at the Provincetown Center for Coastal Studies including Dr. Jooke Robbins and Scott Landry.