This October, Brian Chmielecki (NECWA affiliate) attended the 22nd Biennial Conference on the Biology of Marine Mammals held in Halifax, Nova Scotia to share his collaborative research entitled “Fin Whale (Balaenoptera physalus) Foraging and Distribution in Shallow Waters South of New England.” This conference was sponsored by the Society for Marine Mammalogy.

Brian’s poster presentation interpreted 30 years of data documenting fin whale locations, behavior, and foraging ecology for the inshore region bordered by Long Island, NY and Block Island, RI. Data were obtained using standardized sighting techniques and GPS technologies across 26 field seasons, logging in more than 380 whale watches. Additional sighting information was also included and came from collaborative efforts with other researchers working in the same area.
Results showed that spring through summer finback feeding aggregates utilize different foraging areas each year, probably as a function of prey density and availability. Climate change and other anthropogenic threats are likely to influence these variables and are important to consider in the context of future fin whale population status and recovery.
Brian was approached by many enthusiastic visitors during the two days that he presented at the conference, which hosted over 1,700 guests from all over the world. Brian also attended a panel discussion that addressed strategies for improving communication between scientists and the general public. Brian also participated in a workshop conducted by the creator of a citizen science website called “WildBook”, which strives to bring animal photo-identification to life in an efficient and interactive manner. He learned that the company is developing a cetacean version of the application called “FlukeBook”, which can be accessed by all at http://www.flukebook.org/.
We are so thrilled Brian could experience the conference and its wealth of exciting information about marine mammals, and thank him for contributing to a progressive research effort that tells the story of this often elusive, but fascinating species!

Below is Brian's abstract and poster. Enjoy!

Overview: The waters off southern New England and Long Island, NY are an important foraging region for a sub-set of the western North Atlantic fin whale population.

The inshore region is the subject of long term studies covering the New York bite south of eastern Long Island, NY and the region south and east of Block Island, RI. Questions regarding the annual movements of the animals and their relationship to other segments of the population remain unclear.
This study is part of a collaborative effort to document the habitat use and foraging ecology of cetaceans in this region.

Methods: Data is collected manually at 20 minute intervals including: position, course, sea-state, wind etc. A GPS unit records a continual track log which is archived for fine scale analysis. Sightings are recorded manually along the GPS track. When fin whales are encountered, their behavior pattern is assessed, and dedicated effort to obtain photographs for identification is made when possible.
Data collected from 26 field seasons includes over 380 whale watch cruises. Additional sighting data from affiliated vessels with experienced observers or verified reports are also included in the data set.

Results: Several regions have been confirmed to the south and east of Block Island, RI where feeding aggregations of cetaceans concentrate on during the late spring – summer. These locations are utilized in a variable manner within a given season and also vary annually due to prey availability and density.Impacts from anthropogenic sources and changes to prey availability due to climate change are important factors affecting this species' long-term recovery. This work will help fill gaps in knowledge of other researchers working to conserve this population. 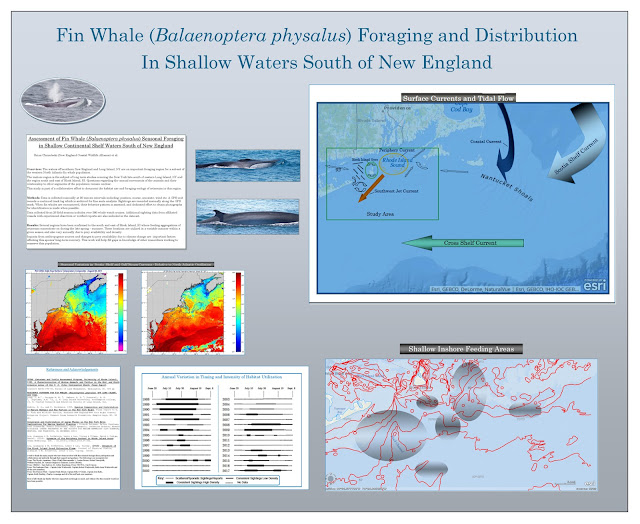 River Herring and the Fish Wardens that watch over them.

River herring live in the North Atlantic during the year and enter coastal fresh water rivers to spawn each spring.  The adults lay eggs in headwater ponds and in the rivers, then return to the ocean.  The eggs hatch within a few weeks and the young fry live in the breeding waters for a few months.  Then they make their way to the ocean where they will live for three or four years before making their own first spawning run. 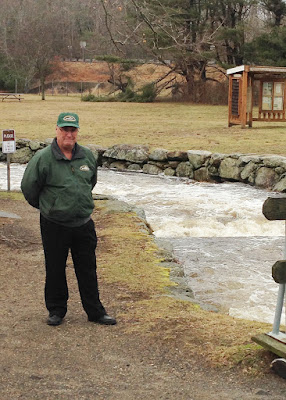 The Taunton River/Nemasket River herring run the largest herring run and spawning area in Massachusetts.  Our river herring enter through Narragansett Bay, swim up the Taunton and Nemasket Rivers, and spawn in the pristine 5000 acre Assawompset Pond Complex.  The Nemasket River traditionally hosts a run of approximately half a million fish in recent years.  Herring have been part of Middleborough and Lakeville history since primitive times and played an important role in the area economics, agriculture, sport fishing and commercial fishing. 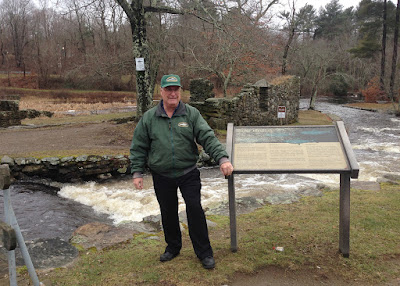 The Middleborough-Lakeville herring run is protected by seven volunteer fish wardens appointed by the selectmen of both towns.  The wardens and several volunteer observers work to protect and improve the herring habitat through sound management practices and public education.  They monitor and count herring during the annual migration, administer the herring catching program and coordinate habitat protection issues with other boards, the state and interested public groups.  Funding comes solely from the sale of herring permits (which has not happened since the 2006 ban on herring catching).