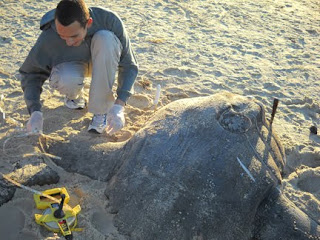 This afternoon, Chris called about an ocean sunfish that stranded dead at the end of Linnell Landing in Brewster, MA. Krill Carson along with two NECWA interns, Nick Schomburg and Caitlyn Dionne, headed down or met at Linnell Landing in the late afternoon. When they arrived on the shores of Cape Cod Bay, a crowd was gathering around the ocean sunfish carcass that was just off the beach parking lot. 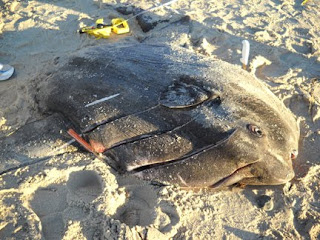 This sunfish was almost 6 feet in length and some of the beachgoers indicated that it had come up on the beach around 2 pm that day. At first, it was difficult to look at the deep propellor scars that cut through the dorsal (top) surface of the sunfish and extended into its left flank. But sunset was quickly approaching so this team focused at the task at hand, that was collecting body measurements as well as tissues from this carcass. 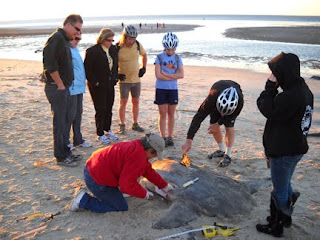 Nick and Krill conducted a Level A exam on the carcass and Caitlyn took pictures as well as recorded data. Krill was able to determine that this animal was a young male. The cause of death was probably associated with a vessel collision, but it is difficult if not impossible to determine if the animal got hit before or after it died. Ocean sunfish spend a great deal of their time floating on their sides at the water's surface. This makes them quite susceptible to getting hit by fast moving boats and vessels in our waters offshore. 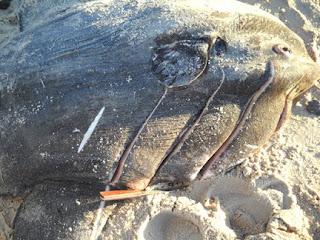 So if you see a live or dead ocean sunfish, either offshore or on the beach, please call Krill on her cell at 508-566-0009. NECWA has a community sighting network for both basking sharks and ocean sunfish and this network is called NEBShark for the New England Coastal Wildlife Alliance. Last year, the NECWA mola team responded to 8 sunfish strandings and were able to measure and necropsy most of these carcasses. 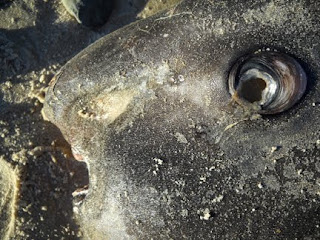 This work is vital for it helps biologists better understand this large and quite unusual species of pelagic fish. Ocean sunfish are regular summer and fall visitors to our waters, but very little is known about their biology and life history. That is why NECWA's efforts are vital and will help us learn more about this special fish that migrates great distances each year to feed in oru productive waters offshore.