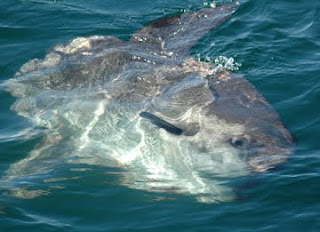 Today Dominica and I went searching for ocean sunfish carcasses that were reported to NECWA and the NEBShark hotline about a week ago. It was a typical Cape Cod day with high winds, drizzle and fog. But what a beautiful day and the perfect temperature to go walking beaches and marshes in search of ocean sunfish that were reported to have stranded dead on Cape beaches. 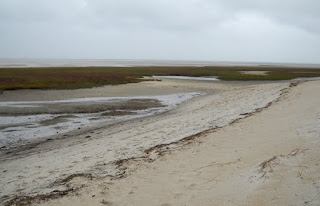 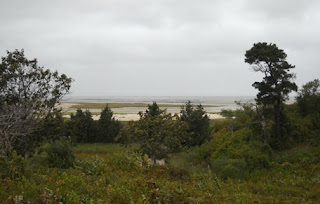 Our first stop was the Brewster Museum of Natural History. Julie O'Neil reported 2 sunfish carcasses to NEBShark this past week. Julie is a big supporter of NECWA and has provided sighting information on both live and dead sunfish in the Brewster area. A big THANK YOU to Julie from all of us at NECWA. 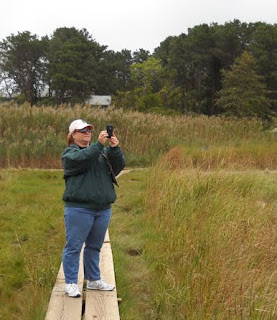 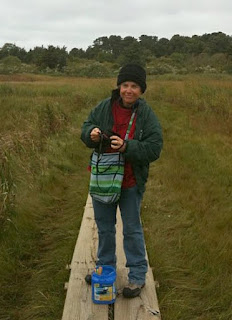 We walked the museum trail to access the beaches of Cape Cod Bay. On the way to the beach, Dominica stopped to take a few shots for the Facebook page that she maintains for NECWA. As we approached the shoreline, we could smell the salt air and feel the stiff breeze. Our first views of Cape Cod Bay at low tide were amazing. Dark, stormy and brooding, but absolutely wonderful. 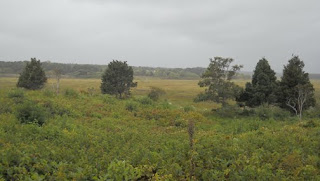 The first sunfish carcass was reported close to the west side of the trial. We were not able to locate this carcass so we searched the beach area in case the carcass had refloated. If the carcass is below the high tide line, it will probably refloat on the next high tide. Then it is anyone's guess as to where it lands. 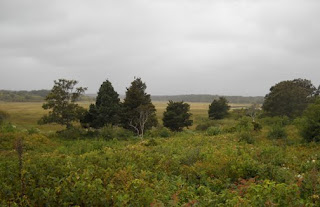 Dominica and I walked the beaches close to the high tide line as well as close to the waters edge. We circled first to the west and then to the south until we arrived at Paine's Creek where a second carcass had been reported. Still no sign of an ocean sunfish carcass anywhere. 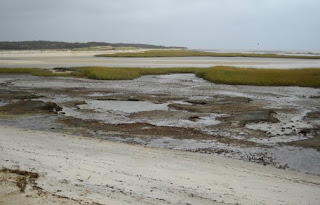 So we hiked back to the car and headed to Wellfleet to check out reports of a sunfish carcass near the old railroad bridge. The report came in from Bob Prescott, Director of the Wellfleet Bay Wildlife Sanctuary. Bob has also been a big supporter of NECWA and has been instrumental in helping us with our ocean sunfish necropsies (autopsies). Another big THANK YOU to Bob, Melissa, Dennis, Mark, Diane and all the staff at the sanctuary. 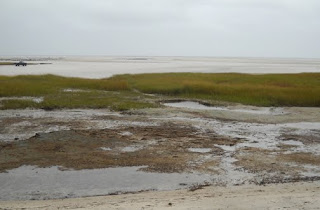 As we searched that area, we once again came up empty handed. We even asked a number of people who were collecting oysters from the mud flats. So home we went empty handed but happy to spend much of the day hiking some beautiful terrain and chatting with the locals. On the way back through Wellfleet, we stopped by a house overlooking the harbor that had a wonderful metal sculpture of a whale tail. Fabulous! 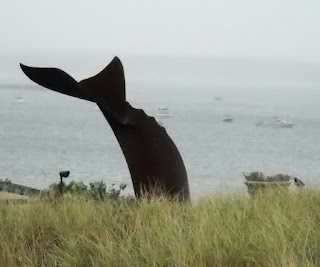 This is ocean sunfish stranding season so we will be back on the road soon. If you see a live or dead sunfish, please contact Krill at 508-566-0009. We need a position and a photo if at all possible. Thanks for your interest and help.