Just when I thought there was going to be a little down time, I get a call from Ranger Nina Coleman at the Sandy Neck Beach Park about a dead ocean sunfish in the surf.


Over the past few days, Ranger Nina and her team have been picking up many cold-stunned sea turtles so this was a bit of a change for them. Ranger Nina met me at the Park's Gatehouse around 1 pm and offered to drive me to the carcass. Once I transferred all my gear and equipment to the park's 4-wheel drive truck, we were off and were accompanied by two local journalists, Christine and Kevin.

We were met down at the beach by resident Ed White who took an interest in this carcass. With Ed's help, I was able to weigh this carcass which Nina had very accurately predicted to be around 368 lbs.


Ranger Nina had to return to the Gatehouse and were joined by Kevin and Christine. But Ed stayed on to help me take down NECWA's portable weighing trips and collect measurements on the carcass. I have measured many ocean sunfish carcasses by myself, but it is so much easier and so much nicer to have excellent company like Eds. We chatted away as we continued to work through the early afternoon.

I opened the body cavity to find the gonad in order to determine the sex of this carcass. This was a girl! Unlike most bony fish, ocean sunfish have only 1 gonad. But female ocean sunfish are said to produce the largest number of eggs over the course of their lifetime, over 300 million! 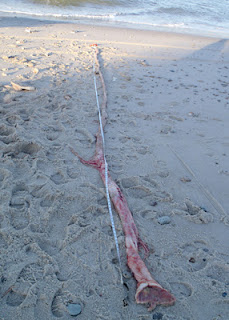 Ranger Nina helped me clean up and then we were off to the Gatehouse once again. Thanks so much to Ranger Nina and the other rangers who work under her. What an incredible team! And thanks to Ed for all his help today. Again, I meet the nicest people doing this work with ocean sunfish and am surprised at how knowledgable people are about the natural life around them.